Old pictures and stories shared at the Esarey Reunions

Browse a catalogue of hundreds of old photos 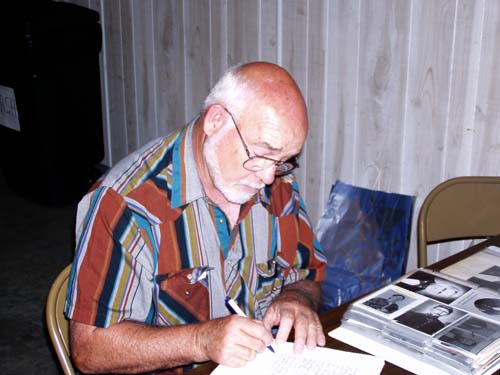 One of the great joys of attending the Esarey Family Reunions is the chance to see photos of our ancestors and their relatives. The image of a great-great grandparent previously known as a name on genealogy sheet is a powerful thing.

And the power of images is just now coming into its own. Even now original photos are turning up that have not been previously seen by most attendees. Because of computers, scanners, and websites everyone interested can share in the wealth of these old images. Unidentitifed photos might be still be identified by modes of comparison that were impossible only a generation ago. With that thought in mind, we want to share some of the images that have showed up at recent reunions.

Do you see photos that you want? Feel free to copy them, but, in order to better share these photos I hope to eventually provide download links for higher resolution files of many of the photos. Images posted on the web are low resolution and high compression – typically these are not suitable for making photographs. Until I get those files created and the download links done, be aware that you will have to ask me to email you a higher resolution file.

Do you have any old photos you’d like to see here? The simple majority of these photos have been scanned at Esarey Reunions and there is every reason to keep sharing more of them. I’m always trying to accumulate photos, especially ones that are old enough that large numbers of descendants would enjoy sharing them. I have tried to not post many images that are too specific or too recent (last 80 or 90 years), but, of course, the lines closest to me are over-represented. I will consider posting anything in the proper vein – the older the better. Contact me and we’ll work out something that protects your precious photos and, at the same time, provides all your relatives with images that they will cherish.

For example: A story of two images

The image I’ve chosen as the logo of this web site was a bit of a mystery that has now been solved. It was found in the early 1980s in the house of Archie Esarey, Keensburg, Illinois, youngest son of Hiram Marcus Esarey and Anna Saalman, formerly of Branchville, IN. The mystery was that it was a painting of one of the main progenitors of the Branchville Esarey line – Jonathan Davis Esarey (b. 1783) but it was in the company of similarly executed and identically framed portraits that dated much later. It has been determined to be a Chicago Portrait Company painting made early in the 20th century from an orginal tintype of Jonathan Davis Esarey.

Chicago Portrait Company salesmen scoured the landscape soliciting old photos of revered ancestors whose images could be “improved” and displayed in large ornate frames. Pictures were sent to large workshops of out-of-work painters in the city who created impressive life-sized paintings at bargain prices. As in many sales pitches of the time, there was a bit of sleight of hand involved. The “hook” was the cheap portraits but the real money was in the mass-produced plaster frames with bubble glass fronts, which were painted to resemble ornate burled wood frames that would seem to be far out of the reach of ordinary farm families. Having obtained such an impressive portrait of one’s pioneer ancestors, who could resist spending the money for a frame worthy of the product?

In contrast, this is a print derived from a original tintype of Jonathan Davis Esarey recently observed at an Esarey Reunion.

Learn more about the Chicago Portrait Company in Gallery 5. 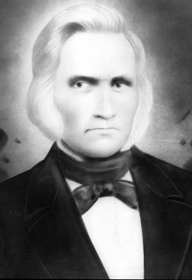 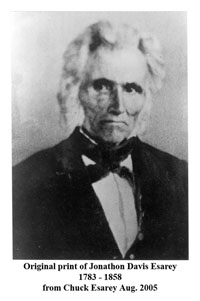