The History of Our History: Reference Material

The first Esarey family history was assembled by Logan Esarey and completed in 1935. Until 2009 there was only a single copy of this volume. The earliest distributed edition of the Esarey history was the 1949 mimeographed (165 pp.) volume entitled “Logan Esarey: His Ancestors and their descendants.” As explained in the introduction:

“Jonathan Davis Esarey (1-3-6-4) in 1910 collected information for a book on the History of the Esarey family and had it ready for the printer when his house burned in Branchville [Indiana] and the records were destroyed. Twenty years later Logan Esarey took up the trail. There is now only one copy of his History. It too could be completely destroyed by one fire…This mimeographed copy of the records is merely an effort to preserve the information he so patiently collected by distributing copies to descendants who are interested, with the hope that not all the copies would ever be destroyed simultaneously. We are well aware that there may be many mistakes and much that is incomplete. We sincerely hope you will look over the records for your branch of the family immediately and let us have your corrections and additions.” [Signatures of Myra Esarey Evans and Laura Pearson Esarey].

The introduction to Logan’s work contained a short accounting of his findings about the earliest verifiably connected Essery/Esrey/ Esarey/Esry history.

Out of the single volume assembled by Logan Esarey up to 1935 came Myra Esarey’s Evans huge accounting of the genealogy and history of the Essery/Esrey/Esarey/Esry family. Like its predecessor, drafts were distributed in mimeograph form with the final volume assembled as a private publication in 1968. With the permission of Myra Esarey Evan’s descendants, a limited reprinting of 200 copies took place in 2001 under the direction of Louella King in Tell City, IN. Numerous on-line sources now cite large portions of this information, but there is no single subsitute for the volume itself, since citation formats do not provide much of the rich contextual detail contained therein.

NOTE: As of July 2010, all these family history reference volumes have been scanned.

The book the Esarey Family Reunion is based on… 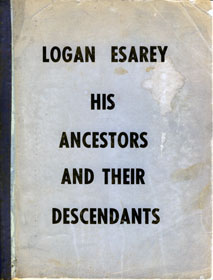 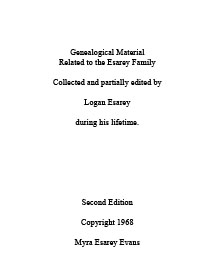 Thousands of descendants of John Essery, with the present-day surname spellings of Esarey, Essery, Esrey, and Esry, are detailed in the classic genealogical resource of southern Indiana “Logan Esarey and his Ancestors and their Descendants” (1968 Myra Esarey Evans). It is approximately 500 pages plus a 337 page name index. It is a foundation resource to hundreds of genealogists, an Esarey family treasure, and a tribute to one of the major life projects of Myra Esarey Evans, daughter of Logan Esarey.

You can download the missing pages from the 2001 facsimile reprint of “Logan Esarey and his Ancestors and their Descendants.” These pages were accidently omitted in the reprint of the 1968 volume. (You will need Adobe Acrobat Reader to view and print these (free download).

The missing pages from the 2001 reprint have an interesting and heroic story.

Pages 232 and 232a in the volume tell the history of the Branchville (Perry County, Indiana) smallpox epidemic of 1903, and the devastating effect that it had on the families of Senator Thomas Gibson and James Gibson (James was husband of Idora Esarey and grandfather and great grandfather to many Esarey descendants now living. Download newspaper coverage of the smallpox epidemic. Also see photo and text in Gallery 1.

The 2010 version of the 1968/2001 Esarey History corrects many errors in the original versions. Download it! 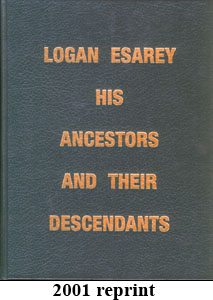 OTHER REFERENCES (on Esarey history and genealogy)

1947 Logan Esarey, The Indiana Home, R.E. Banta, Crawfordsville, IN. This is a classic volume describing pioneer life in Indiana. Note: The original Banta edition version of this classic book on Indiana pioneer days contains a chapter of Esarey family stories called “A Tale or Two” that is not in the subsequent Indiana University Press editions of the book. The chapter ” A Tale or Two” contains the family story”The Bewitching of Blackstock” about John and Sarah Hester Esarey ca 1806. “The Bullfrogs of Reily Hole” is a Branchville story. These Esarey stories are now available here on this website.

1971, Lee Fisher, with an introduction by Billy Graham, Fire in the Hills: The Story of Parson Frakes and the Henderson Settlement., Abingdon Press, New York. (story of exciting and sometimes dangerous missionary work in the 1920s Appalachian Mountains done by Hiram and Leota Frakes, of Branchville. Frakes was the grandson of Mary Ann Esarey and Grayson Frakes and a cousin of many Esareys. See a newspaper article on Hiram Frakes with pictures of 1896, 1900, and 1906 Branchville school children. Note: This book has recently been reprinted by the Henderson Settlement in western Kentucky.

2002, Stephen P. Emanuels, The Rhoads-Esrey Letters: 1846-1873: Letters of Lemoore Pioneers including Daniel Rhoad’s own account of the rescue of the Donner Party. Kings River Press, Lemoore, CA. Note: Letters between Jesse Esrey’s family in Missouri and his offspring in California have been presented in a number of publications and websites. Among these are Esarey 1968 (with separate essays by Mildred Esrey Reynolds and Earl Rhoads), Soundan and Bowater 1995, and Emanuels 2002. Of these, Emanuels 2002 is the single most complete assembling of the letters and the most historically contextual study, with explanatory footnotes throughout. Contact: KingsRiverPress [at] comcast [.] net. For the first time ever ALL of the correspondence of the California Esrey and Missouri Esrey family is assembled here on this web site.