A reference center for the distribution of Esarey and related research publications, files, and reference materials

Special credit, thanks, and affection is extended to Patsy Van Kesteren, daughter of Myra Idora Esarey Evans, for all content presented here, and especially for her dedication to the idea that the primary goal of her mother’s life’s work was to share an incredibly complex and deep history of family ties with all who desire to know about it.

Myra Esarey Evans, second child of Marcus Logan Esarey and Laura Pearson Esarey, was born in 1899 in Cannelton, Indiana. She made her father’s dream of researching and assembling a comprehensive Esarey Family history her life’s work. Myra’s work, as expressed best by its prolific results (especially given the technological and fiscal considerations it was done under) cannot in realistic assessment be considered a hobby. This was a full-time intent pursuit – a goal-driven process – augmented by relentless collection and organization of all available information. As evidenced by many many thousands of letters from informants across the country, Myra’s day-by-day, year-by-year production was steady and directed towards a single goal. The results, as presented on these pages, speak for themselves. 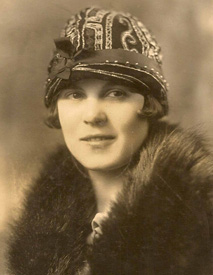 During his lifetime, Logan Esarey collected, preserved, and edited a great deal of family history, always attempting to make up for the family’s disastrous house fire where so much assembled history was lost. By the middle 1930s (when his health failed) he had collected enough information for a volume. This volume, dated 1935, had genealogical charts, clippings and numerous images (up to and including Logan’s death in 1942) bound together in a nearly 600 page hardbound book.

In 1949, Myra mentioned this book’s existence, saying “There is now only one copy if his History. It too could be destroyed by one fire. It was Logan Esarey’s intent to make of it a beautiful volume including photographs, maps, etc.” From that time until now, only this single copy of Logan’s initial family history and genealogy existed. In order to safeguard and distribute this singular family treasure, Myra’s daughter Patsy agreed it should be scanned (late 2009) and distributed here on the Esarey Reunion web site.
COMPONENT FILES:
Part 1 (322 pp – Cover to p. 232 plus many pictures) (13.1 MB DOWNLOAD) 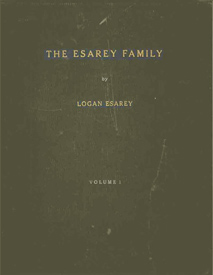 The assembled components for the Esarey Family history had been destroyed once, and then laboriously reassembled by Logan Esarey. After Logan’s death, only one copy of the family history – the 1935 volume – existed.

To address apprehension that the assembled records might again be lost, Myra created the first edition of “Logan Esarey: His Ancestors and Their Descendants” releasing 100 copies in mimeograph form in 1949. This edition assured that never again would all the records of Esarey genealogy would be kept in one place, a conceptl Myra’s daughter Patsy and this website strive to continue. 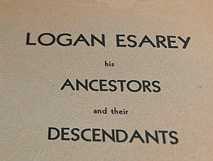 Myra continued and greatly expanded the work begun by her father during his lifetime. In 1968, after nearly 20 more years of intensive work, Myra issued the primary edition of “Logan Esarey: His Ancestors and Their Descendants.”

This mimeographed volume, totalling 1069 pages, has enjoyed great success as one of the main genealogical resources of southern Indiana. Coming as it did well before the advent of internet genealogy, and representing the almost unheard of goal of attempting to document each and every descendant of an early progenitor, this monumental volume represented a very different kind of work than the standard ancestor “lineage” genealogies of its day. The result is a broad and breathtaking portrait of the FABRIC of family interconnections generation by generation for a span of some eight or nine iterations, the simultaneous branching and intertwining of family history with the American national narrative of expansion and opportunity.

It is unclear how many copies of the 1968 volume were produced. For scores of descendant families, and for numerous emerging genealogists in the coming decades – the 1968 edition immediately became a family treasure handed down with the same care as family bibles and photo albums. But by the 1990s it had become essentially impossible to obtain copies.

Careful plans for a reprint were spearheaded by Louella Esarey King and resulted in a handsome hardbound volume in 2001. By 2009 most of the 200 copies of this reprint had been eagerly purchased and, in planning for the 100th Annual Reunion, this web page distributing all the works electronically was conceived.

So now, following the tradition that has comprised the Esarey Family history efforts from the beginning of this century-long endeavor (choosing maximum distribution and intent to share over all other concens), Myra’s daughter Patsy Van Kesteren has decided to make the 1968 volume available for free download here on the Esarey Reunion website. Mark E. Esarey spent countless hours preparing the best possible copy of the nearly 1100 pages prior to scanning and correcting basic structural inconsistencies.

COMPONENT FILES: (be patient; some of these are very large downloads!)
NEW! COMPLETE VOLUME! SEARCHABLE TEXT! (Cover to 1069) (41 MB DOWNLOAD)

Images only (these are also embedded in full text): (600 kb DOWNLOAD)

The 1968 volume completed the literal dream expressed by Logan Esarey’s original 1935 compilation. But Myra had by no means completed her work. At nearly 70 years age she launched immediately into the next stage. Volume II of “Logan Esarey: His Ancestors and Their Descendants.”

In this case, rather than the ancestory and subsequent descendant lines of Logan Esarey’s father (John Clark Esarey (1841-1924), this volume’s cross-cutting focus was on Logan Esarey’s mother Barbara Ewing (1840-1907). Once again, a progenitor, John Ewing (born 1660) was identified and family history brought forward.

For various reasons, this nearly 700 page volume was not made widely available after it was completed. Distributing it to a broad audience here is a welcome opportunity to preserve and extend the use of Myra’s lifelong efforts.

Note: Part C was added in 2011, many months after the rest of the files. If you downloaded the other files prior to January 2011, be sure to supplement them with Part C. 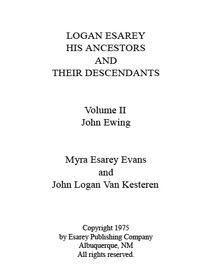 Mrya’s files contain a number of references and manuscripts. Those not under copyright can be shared with other researchers here.

Eli and Mahalah Jay manuscript (ca. 1900): Eli Jay and his wife Mahalah Pearson Jay lived in Richmond, IN. They were Quakers, born 1826/1827 in Miami County, OH and were interested in the genealogy and history of the Friends, especially the West Branch Friends, founded in Miami County, Ohio soon after 1800. The Jay Collection is primarily curated at Earlham College in Indiana. Myra’s mother, Laura Pearson, descended from these roots and either she or her father Logan Esarey obtained this manuscript by Eli Jay outlining genealogy and history of those lines. DOWNLOAD (ca. 10 MB).

The History of the Little Family: Circa 1905, James A. Little of Cartersburg, IN published a small undated volume detailing some history of the matrilineal line of Myra’s grandmother, Melissa Little Pearson. This tiny but rare volume is available as a scan here. DOWNLOAD (550 kb).